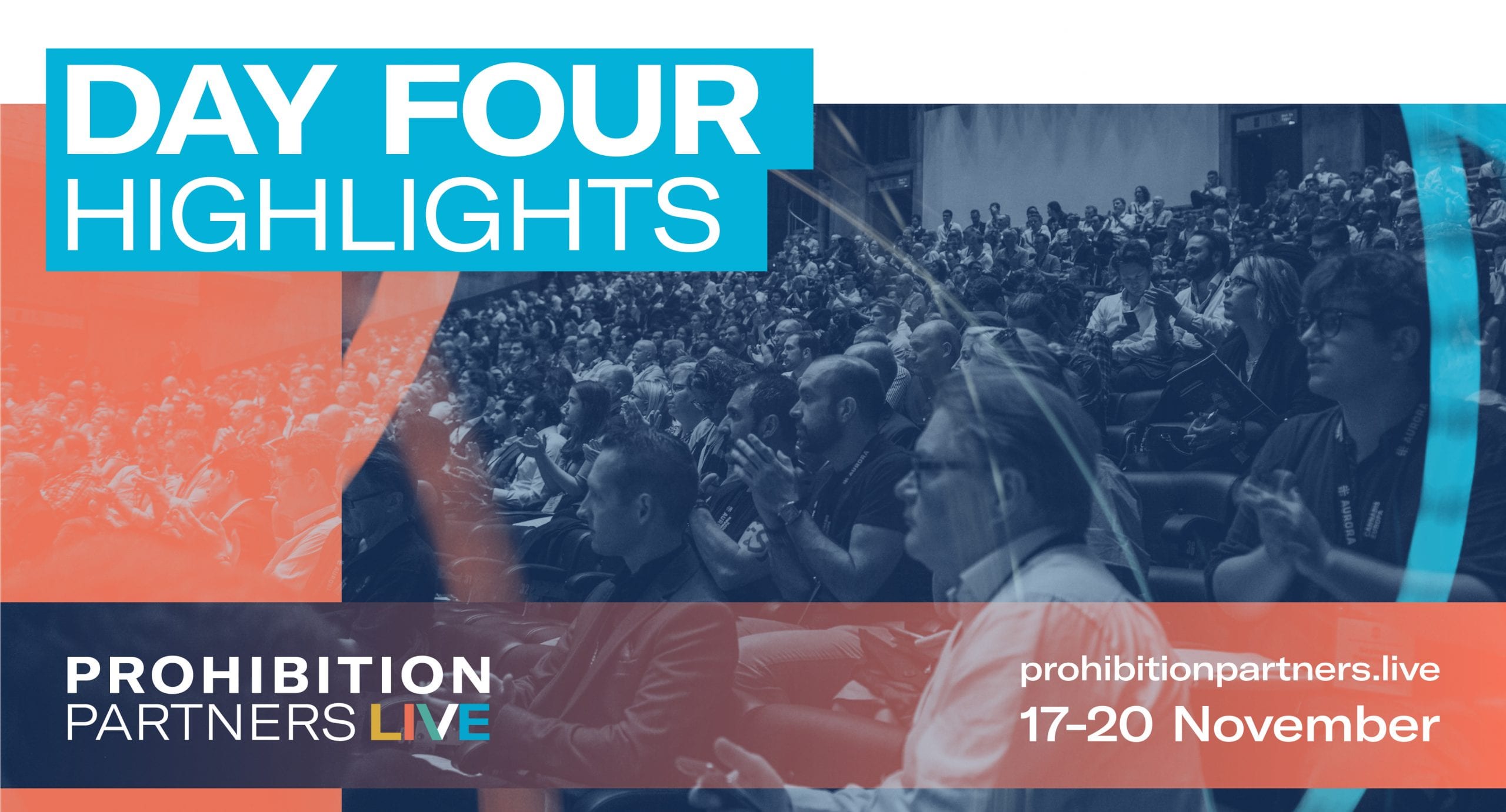 Over the past four days, we have welcomed more than 1,000 delegates and 120 industry-leading experts to Prohibition Partners LIVE. We want to send our warmest thanks to all our speakers, moderators and attendees for joining us for a week of truly fascinating conversation and debate around Cannabis & Psychedelics.

Today’s focus was on culture and innovation - we got to hear from some of the biggest, boldest and also most iconic voices from the world of music, sports and business. Here’s a few key highlights from this content-packed day:

We opened our Culture & Innovation Day by meeting two big names across the sports industry: former professional rugby player Ed Williamson and former professional soccer player Rachael Rapinoe. Both athletes have been on a mission to educate fellow sportspeople and the general public to the benefits of cannabis and in today’s panel they shared some personal insights about their experience with injury, recovery and the therapies available:

“It felt like I had a clamp on the back of my head for the last 9 months... and cannabis just relaxed all the muscles.” - Ed Williamson, former Professional Rugby Player & Professional Artist, Williamson Art

“They've only legalised CBD whereas there are hundreds of different cannabinoids.” - Rachael Rapinoe, former Professional Soccer Player & Co-Founder of Mendi

In this open discussion, Williamson and Rapinoe also discussed why the sports industry needs news spokesmodels and why their role is central to removing the stigma that is currently still attached to cannabis use:

“It's going to take the voice of a current athlete so we can tap into their audience” - Rachael Rapinoe, former Professional Soccer Player & Co-Founder of Mendi

Next, on the Cannabis Europa stage, our panel of experts shared their views on the future of the cannabis industry. What will it look like in 2030?

“For medicinal use, the future will be a pill or something that can be administered.” -  Benjamin Patock, Head of International Relations, Boveda

Whilst it is hard to predict what this fast-changing industry will look like 10 years from now, our panel unanimously agreed that the decriminalisation of cannabis should be on the global agenda:

“Nobody should be in jail for the consumption cannabis” - Benjamin Patock, Head of International Relations, Boveda

Finally, the panel shared their opinions on how they believe the cannabis industry should change moving forward:

"If everyone were paid fairly and treated correctly the industry would benefit from a social equity perspective." - Amelia Middlemiss, Director, Project Twenty21

“The time of cannabis thinking its special is over. I think they now need to be looked at just like every other business.” -  Shane Duncan,Chief Operating Officer, Cann Group Limited

Over at the Cannabis Americana stage, we looked in-depth at the craft cannabis movement - both it’s recreational and possible medical future. Should patients be able to grow their own product, or is it best left to the experts? Here’s what our panel of experts had to say:

“If you think of a homegrown tomato you think of it as a better product. With weed, why wouldn't it be the best when it's grown from home?” - Johanna Silver, Author

“Can we draw a line between medical and medicinal? Why wouldn't you be allowed to grow it yourself? I haven't heard of people having any real issues with their homegrown cannabis. Does every homegrown medicinal cannabis product need to be prescribed?” - Javier Hasse, CEO & CO-Founder, El Planteo

Our experts also discussed the possible risks patients could face and whether it’s actually worthwhile for them to gain a ‘green thumb’:

Is cannabis turning the red carpet green? In this next panel we met with the directors, producers and writers behind this year’s boom in cannabis air-time. In this engaging debate, the spotlight was on communication: what language and tone should broadcasters use when covering the topic?

“When I analysed the stigma (of cannabis)...I discovered that TV and film made cannabis seem silly, like a punchline...this was in sharp contrast with what I discovered within my first hour of research (for my documentary CBD Nation)” - David Jakubovic, Film Director, Mad Machine Films

Films, TV programmes and streaming platforms have the power to stir opinions. Our panel believes the conversation shouldn’t be reserved to cultural icons alone:

“There needs to be a duality...pop culture influences Americans as much as documentaries...there's a nuance to it.” - Joshua Otten, CEO, Ronin Content

We then met with the chefs, restaurateurs and entrepreneurs on a mission to bring some extra flavour (and benefits) into our kitchen. In Cooking with Cannabis, our food industry experts shared some of their favourite recipes, discussed the main benefits of cooking with cannabis and spilled the beans on why they love this fast-growing community so much:

“This is not a plant that needs to be stigmatised, we need to move on” - Warren Bobrow, Alchemist & Author

“I came for the pot and I stayed for the people” - Elise McDonough, CannaCraft Brand Manager, Satori Confections

“The culture and the people (in cannabis) is what keeps me going in this industry, and seeing lives change” - Edible Dee, Executive Cannabis Chef & Author

With a tight-knit and passionate community like this, we expect to hear a lot more about cooking with cannabis in the near future.

Next on the Cannabis Americana stage, we talked with former NBA superstar Al Harrington about a broad range of topics at the core of his ethos: legislative reform, social justice and fair opportunities. Here’s a few key insights from this insightful, powerful and provocative conversation:

“It's really hard to trust the government...only those who have the resources can take advantage of the loopholes” - Al Harrington, Former NBA Player & Non-Executive Director, MedMen

“Make it accessible to the people that need it...black or minority people should own these dispensaries. This is the first form of reparations we can benefit from” - Al Harrington, Former NBA Player & Non-Executive Director, MedMen

We opened the PSYCH stage by asking our experts: do psychedelics really have the power to bring us closer to nature? We engaged in a stimulating and eye-opening debate touching upon the benefits of using psychedelics, the myths surrounding its effects and its possible future uses outside the clinical setting.

“While psychedelics clearly increase nature-relatedness in those undergoing therapy, it may not be the silver bullet to fix wider climate related issues.” - Eddie Jacobs, University of Oxford Research Fellow, Wellcome Centre for Ethics and Humanities

“It is unfortunate that most clinical trials are by definition carried out in clinical settings, it would be interesting to scientifically explore the use of psychedelics in nature-based settings” - Ingrid Autran, Medical Doctor, EmmaSofia

Next, we looked at the science behind why LSD, Mushrooms and MDMA have always been associated with creativity. In Positivity, Creativity & Psychedelics we met with Professor Guy Goodwin from the University of Oxford and Ronan Levy from Field Trip Health to find out their opinion on both the clinical and potentially recreational benefits of using these molecules:

“In my mind, it is impossible that psychedelics wouldn't increase creativity, considering how much they can show people new ways of thinking and approaching subjects” - Ronan Levy, Co-Founder & Executive Chairman, Field Trip Health

“Both paths out to exist: the medical side of usage can be extremely helpful for patients, but the door should remain open to those without a clinical diagnosis, there are huge benefits to be wrought in this domain too” - Ronan Levy, Co-Founder & Executive Chairman, Field Trip Health

“One major aspect of set and setting is not preparing people for what should or shouldn't happen but informing the patient on what may well happen with a view to familiarising the patient with their potential journey” - Professor Guy Goodwin, Emeritus Professor of Psychiatry, University of Oxford

If you already have tickets - dive straight in to Day 4 of Prohibition Partners LIVE here.