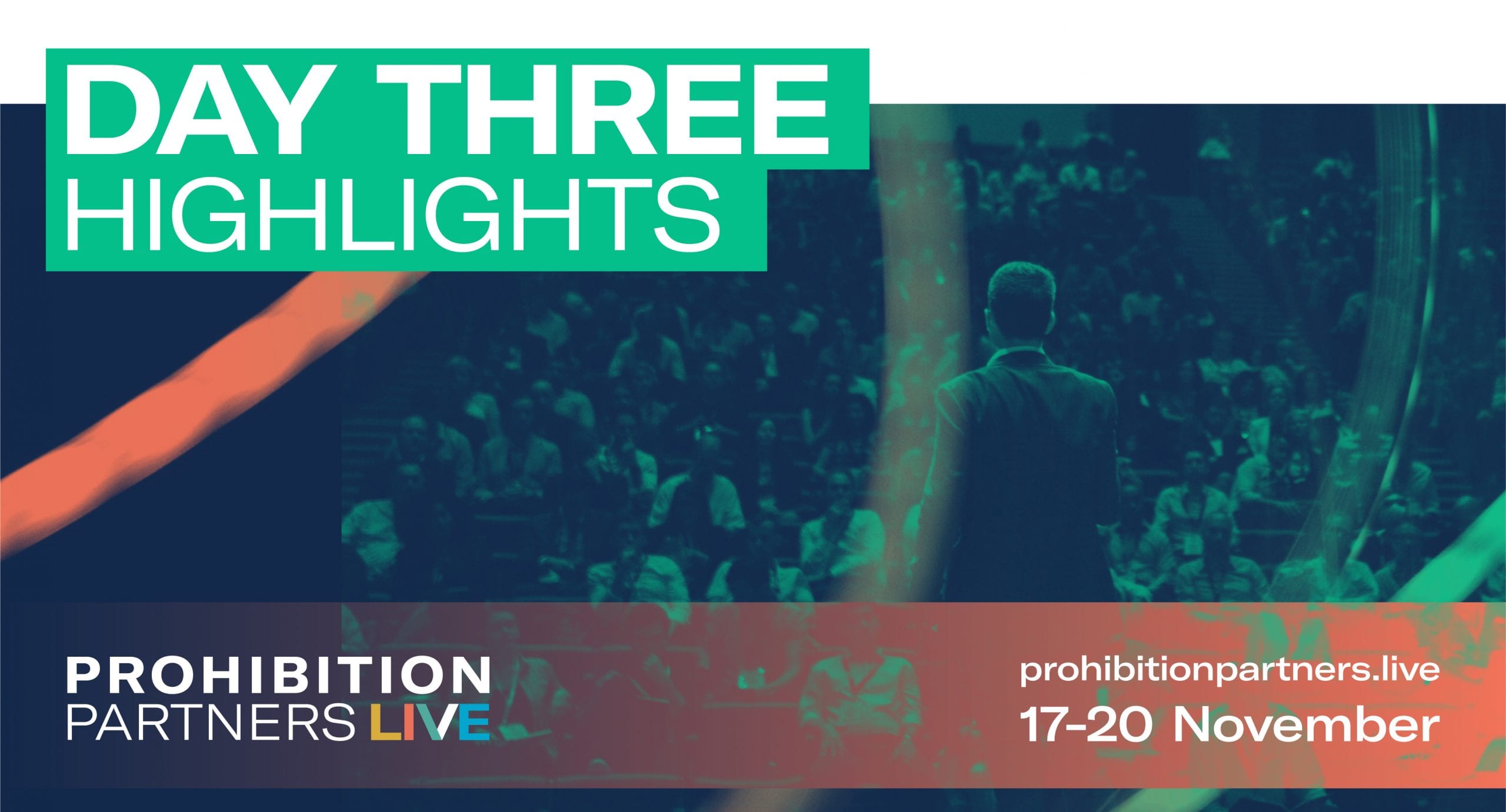 As day three of Prohibition Partners LIVE began, we were greeted by the news that the European Court of Justice has declared CBD not to be a narcotic. This welcome news saw the European Cannabis industry collectively breathe a sigh of relief. Day three focused on business and investment and welcomed some of the most disruptive entrepreneurs, investors and operators at the forefront of this fast-changing industry. Here are some of the key insights they shared across the 8-hours worth of sessions.

Our Business & Investment Day kicked off at 12:15 GMT with a preview of the day ahead and a round-up on the current state of the cannabis market introduced by MAZAKALI’s Founder and CEO Sumit Mehta and Prohibition Partners’ Co-Founder and Managing Director Stephen Murphy. The conversation, unsurprisingly, was heavily focused on the positive effects the new government in the US could have on industry across the country.

We opened the conference with The Great China Cannabis Opportunity, a panel discussion where Brian Sheng Founder and CEO of Asia Horizon, Ean Alexander CEO of Altum International and Apple Zeng Co-Founder of SangMa Technology Holdings (Asia) Limited shed some all-important light on “the sleeping giant”. When can we expect China to wake up to the booming cannabis market?

“I'm very optimistic about the situation in China, they are on their way to opening up the market while maintaining really sensible control policies” - Brian Sheng Founder and CEO of Asia Horizon

“The Chinese market is a sleeping Giant beginning to wake up, which will develop in a gradual and measured way” - Ean Alexander CEO of Altum International

The panel also agreed that despite the Chinese cannabis market being in its infancy, other countries simply cannot ignore it:

“It's becoming apparent to people that China's market is just too large to ignore. Especially in the CBD cosmetics sector, China is open for business.” - Brian Sheng Founder and CEO of Asia Horizon

Over at the Cannabis Europa virtual stage, we got some invaluable insights into how to (and how not to) build a cannabis portfolio, directly from a brilliant panel of business minds and academics. David Bonnier founder of Enexis AB, Mitchell Baruchowitz, Managing Partner of Merida Capital Partners LLC and Alan Jagolinzer, Professor of Financial Accounting and Head of the Accounting Faculty at the University of Cambridge joined the panel to share their expertise with us. Here’s a taster of what they had to say:

“I think CBD is so hyper competitive and so fraught with risks in terms of what they're going to do at the federal level in the United States” - Mitchell Baruchowitz, Managing Partner of Merida Capital Partners LLC

Next, we were joined for an exclusive interview with Marcus Stuttard from the London Stock Exchange to discuss the impact of the FCA update. To find out if London could be the future financial hub for the European cannabis industry.

“The UK is going to be a brilliant market from the point of view of CBD, thanks to clear regulation from the FSA. As long as there is a good management team, it shouldn’t matter when you bring a company to market, it’s a regulated sector like any other” - Marcus Stuttard, Head of Primary Markets London Stock Exchange

It’s too early to tell if London will truly become the cannabis industry’s go-to European capital, but Stuttard’s encouraging words will surely please the many small and large businesses working with CBD.

Later on in the evening, we got to discuss what some of the industry’s very own ‘unicorns’ might look like. In this inspirational fireside chat with Ross Lipson CEO and Co-Founder of Dutchie, Karan Wadhera Managing Director of Casa Verde Capital and Prohibition Partners’ own Stephen Murphy, we had a uniquely engaging conversation with two of the most sought after leaders in the industry right now.

“Don't spin too many plates at the beginning, you'll drop them all” - Ross Lipson CEO and Co-Founder of Dutchie

“The default for any startup is failure, you're fighting just to stay alive, to stay afloat. The limitations of regulation in cannabis are weights around your ankles, if you can keep your head above the surface, 10 years from now, this is where we start to see real value”  - Ross Lipson CEO and Co-Founder of Dutchie

In this lively discussion, our experts also discussed the need for access to education and compliance as a clear path to success for service providers:

“We've always been very heavy compliance focused which is sometimes pretty boring. But they are critical. We're dealing with a massive transition from a regulatory perspective. Great compliant systems are really critical.” - Karan Wadhera Managing Director of Casa Verde Capital

Who are the main disruptors and innovators in the cannabis industry? In Disrupting the Game we met Kate Miller, the co-founder and CEO of Miss Grass (dubbed the “Goop of cannabis by W Magazine!) and David Kessler, the VP & Head of Horticulture and Customer Success at Agrify where he has pioneered new technologies and methods for indoor farming. In this engaging discussion, Miller and Kessler were keen for the industry to support those who had previously been negatively impacted by the system.

“Reinvestment in communities that are affected the most...on the war on drugs” - Kate Miller, the co-founder and CEO of Miss Grass

In Time at the Bar - Could Infused Drinks be the end of High ABV Alcoholic Drinks , we mixed in with some of the leading drinks experts to shake and stir our opinions about cannabis infused beverages from two of the key players in the area right now.

“Cannabis beverages already boast 1.2% of the market share in Canada, that share will increase with the marketing input of the multinationals.” - Terry Donnelly Chairman & CEO of Hill Street Beverage Co. Ltd

In a relatively young market, there are still many unknowns. Many consumers still don’t feel ready for the switch from consuming alcohol to cannabis:

The panel discussed which products would be the driving force behind growth in infused drinks, the specific drinks that could drive this industry moving forward.

“Which will be the dominant players, which categories? Will it be wine, beer, spirits? Is it going to follow the same formats? That's all still to be determined”. - Terry Donnelly Chairman & CEO of Hill Street Beverage Co. Ltd

Speaking with Jake Skinner, CEO of Growth, we discussed whether in-person conferences are likely to take place next year and the importance of offering more than just another event.

“When I first started this, people said to me ‘do we need another Cannabis conference?!’" -  Jake Skinner, Co-Founder and CEO of Growth

We closed the Cannabis Americana stage by looking at the future of cannabis events and, most importantly, assessing the impact global cannabis conferences have had on determining legislation, creating better access to education and showcasing the benefits of cannabis products.

Finally, over at the PSYCH stage, we met with some of the leading figures in psychedelic journalism and publishing in Mushrooms in the Media. We explored how these medicines are beneficial for boosting well-being and health of older people:

“There's a new relevance that people find once they hit their later years. Psychedelics and cannabis can be a huge source of meaning and physical health especially towards the end of people’s lives.” - Abbie Rosner, Forbes

Moving forward, the panel discussed the role journalism plays in furthering the discourse on safe and beneficial psychedelics use:

“Identifying and standing up for our ethnicity is important in any aspect of journalism and that is something we have the opportunity to do in the cannabis space.” - Adrian Farquharson, MARY Magazine

Wrapping up today’s Business & Investment Day we welcomed a diverse array of speakers to the PSYCH stage. From Spiritual Teachers and Healers to CEOs, our When Mother Nature Becomes Big Business panel covered everything you wanted to know about psychedelic medicines and the risks this industry might face if it becomes over-commercialised. One of the first topics of discussion was the difference between commercialisation and industrialisation. Our panel concluded that sustainable farming is a form of good commerce and that moving forward, it is crucial for the industry to remain eco-friendly.

“There is a line we need to draw between commercialisation of resources, which is are age old human practice and the relatively new form of corporatised method of resource use which can be much more destructive” -  Carlos Tanner,  Director of the Ayahuasca Foundation

In what was a truly fascinating, eye opening discussion essentially around ethics and respect, the topic of reciprocity also took central stage in the debate:

“In our culture if you take something, you give back. It's called reciprocity… These plant medicines have a role to teach us here, in how to be stewards of nature and not just users of resources. In our culture, reciprocity is a central value.” - Kuauhtli Vasquez, Spiritual Teacher and Healer

Join us tomorrow for the last day of Prohibition Partners LIVE where we will meet some of the industry’s top cultural icons for a content-packed day of disruptive talks across three stages: Cannabis Europa, Cannabis Americana and PSYCH.

If you already have tickets - dive straight in to Day 4 of Prohibition Partners LIVE here.