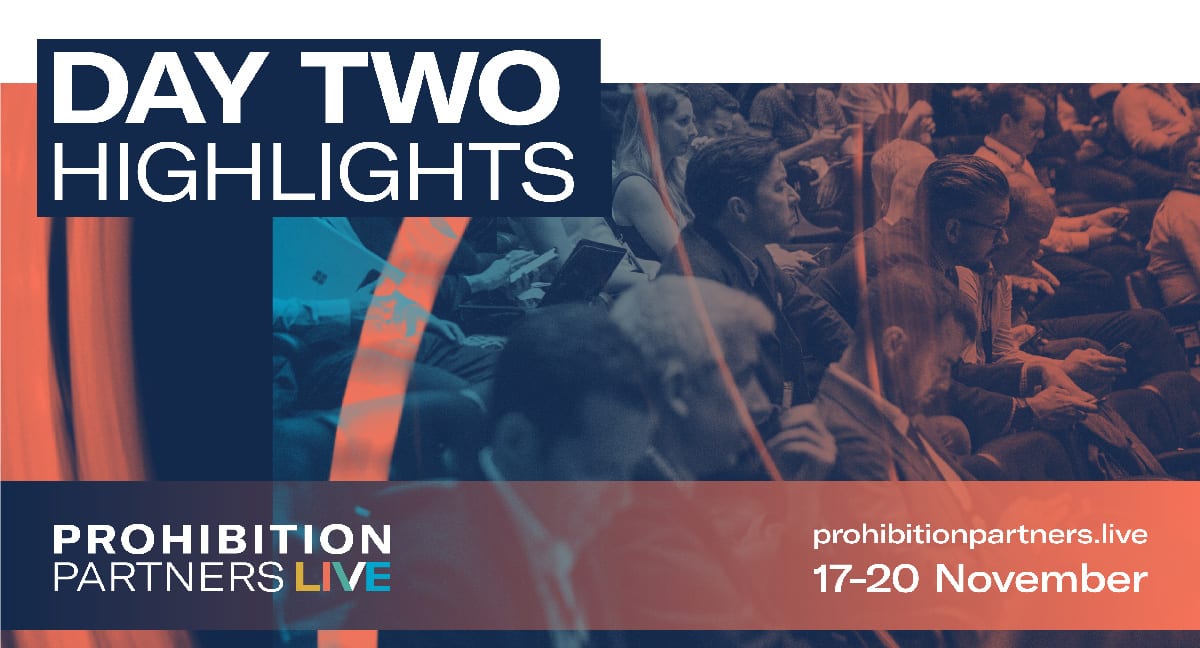 Day two of Prohibition Partners LIVE was dedicated to global Policy & Reform. Asking some tough questions and opening up some heated discussions across five virtual stages. From Members of Parliament to leading anti Prohibition activists in the US, we heard from a truly inspirational range of speakers to spark the debate around the direction of reform.

The first session welcomed Jonathan Nadler, Group Managing Director of LYPHE GROUP to the stage to debate on Patient & Public Market Access in the UK. Nadler’s discussion centered around creating better access to education with regards to the benefits of cannabis and increasing access to clinics for the growing numbers of patients in the UK.

“We're in a place where the foundations have all been made, now we just need to tackle the 'stigma'?” - Jonathan Nadler, Group Managing Director of LYPHE GROUP

Next on the Cannabis Europa stage we spoke to Crispin Blunt, Member of UK Parliament in the Conservative Party and Ronnie Cowan, Member of the Scottish National Party to discuss the rewards of reform and what impact this will have both financially and socially in the UK. This occasionally heated conversation ebbed and flowed, with both sides ultimately championing the need for a vastly improved service with regards to Medical Cannabis in the UK.

“What happens in the United States will play an important influence on what happens here... What happens on a federal level will be a game changer.” - Crispin Blunt MP

In It's Not EU, It's Me: The European Cannabis Puzzle, Europe’s key activists and business leaders from across Spain, Germany & France joined our panel to discuss what Europe needs in order for real change to occur. Joining us were Ludovic Rachou, Founder of Rainbow and treasurer of the French professional Hemp Union (SPC), Queralt Prat-i-Pubill of Union de Pacientes, and Kai-Friedrich Niermann, a lawyer at his Firm KFN+ which consults major CBD and medical cannabis companies and is the legal advisor to the European Industrial Hemp Association (EIHA).

“The European Courts of Justice are a game changer. Everyone across Europe is looking at the Cannavape case. If it’s judged as legal they will have to open up the markets in France.” - Ludovic Rachou, Founder of Rainbow and treasurer of the French professional Hemp Union (SPC)

"If the courts decide that Hemp is a legal commodity, then the EU has to respect that" Kai-Friedrich Niermann, KFN+

Over at the Cannabis Asia stage, we were joined by Avnish Pandya, Co-Founder and Director of the Bombay Hemp Company, Rohit Shah Co-Founder and CEO of Hemp Horizons and Abhishek Mohan the Co-Founder of Hempstreet, for a closer look at the possibility of an emerging cannabis market in India. Together, they discussed the impact the cannabis plant has had on the market and how bringing back the significance of this plant to the population would positively impact Indian medicine and culture.

“Extract oil from the leaf but not allowed to play with the compounds.” (Need to rewatch to catch precisely) - Rohit Shah Co-Founder and CEO of Hemp Horizons (Health Horizons)

Following the disappointing aftermath of the New Zealand referendum, which saw 50.7% of voters opposing the legalisation of cannabis, in Lessons from the New Zealand Referendum we examined what went wrong and discussed what the future of cannabis in New Zealand might look like moving forward. We were joined by two influential voices from the campaign, Kali Mercier, Advocacy Manager for the New Zealand Drug Foundation and Joseph Boden, Professor and Director of the Christchurch Health and Development Study at the University of Otago Christchurch. This honest and open discussion between two passionate campaigners should act as an apt guide for any countries looking to follow suit.

In The Cannabis Tax Experiment, panelists took part in an engaging debate, looking at ultimately who actually benefits from these newly generated tax revenues. We were joined by Amber Littlejohn, the Executive Director of the Minority Cannabis Business Association, Rob Bonta, California State Assembly Member for the 18th District representing cities like Oakland, Alameda and San Leandro; John Hudak the deputy director of the Center for Effective Public Management and a senior fellow in Governance Studies and Justin Strekal the Political Director for NORML. High on the agenda was the impact legalising cannabis at the federal level would have on cannabis businesses, how to strategically remove the barriers preventing the illicit market place to switch to becoming legal and whether the reduction of taxes also reduces tax revenue.

“Do I think lowering taxes is fantastic? Absolutely. Don't let me discourage any lawmakers from doing so. But I can't help but think those taxes could go back into helping fund small businesses in the community.” - Amber Littlejohn, Executive Director, Minority Cannabis Business Association

Next on the Cannabis Americana stage we discussed the true impact of prohibition in the United States. Joining the panel were Natalie Papillon, from The Last Prisoner Project, Karim Webb, Entrepreneurial Activist & CEO of 4THMVMT; Stacey Walker, Linn County Supervisor and Iowa National Delegate to the Democratic National Convention and Khadijah Tribble, Vice President for Corporate Social Responsibility at Curaleaf.

"We're perpetuating inequity, which has been in place since the formation of this country. This is an opportunity in a newly regulated industry to ensure that in the cannabis space we have some semblance of fairness" Karim Webb, 4thmvment

Psychedelic reform has come to the fore in recent weeks, especially in the US, with states such as Oregon now decriminalising all drugs. our industry experts discussed the Future of Psilocybin, Legislation in the US, as well as the general Therapeutic Use of Psychedelics - with an in depth look particularly at their effects on the human brain.

Project Psilocybin saw Sara Brittany Somerset joined by Dr Olga Chernaloz & Matt Emmer for a broad look not only at the increasingly obvious benefits of Psilcybin, but logical next steps towards active treatment centers and beyond.

"The way of the evidence coming from the studies means that even the FDA has fast-tracked the use of MDMA-assisted therapies" Dr Olga Chernaloz, WAKE Network

In Legislation in the US we took on a number of viewpoints. Joined by Lawyers, Council Members and an ex-prisoner to discuss how policy could change, but also what things might have looked like now had policy changed already.

"There are still people serving extreme sentences for crimes relating to psychedelics. Within the prison system themselves, those incarcerated are yet to feel the benefits of increasing legalisation" William Leonard Pickard

To close out the day was Professor David Nutt, a leader in the Psychedelic research space for many years who gave an extremely engaging keynote on brain studies pertaining to previous drug trials. Surprising results and context aplenty, this work has truly set the standard and paved the way for many of the companies we see in the space today.

"I'm no fan of Brexit, but it gives us an opportunity to do things differently in the field and follow the Switzerland example" Professor David Nutt

Watch all sessions back via the agenda section of the virtual event. Join the global cannabis conversation today - last tickets for Prohibition Partners LIVE on-sale here. Join the debate on social media #PPLIVE