In Conversation With… Steve DeAngelo of Harborside Inc. 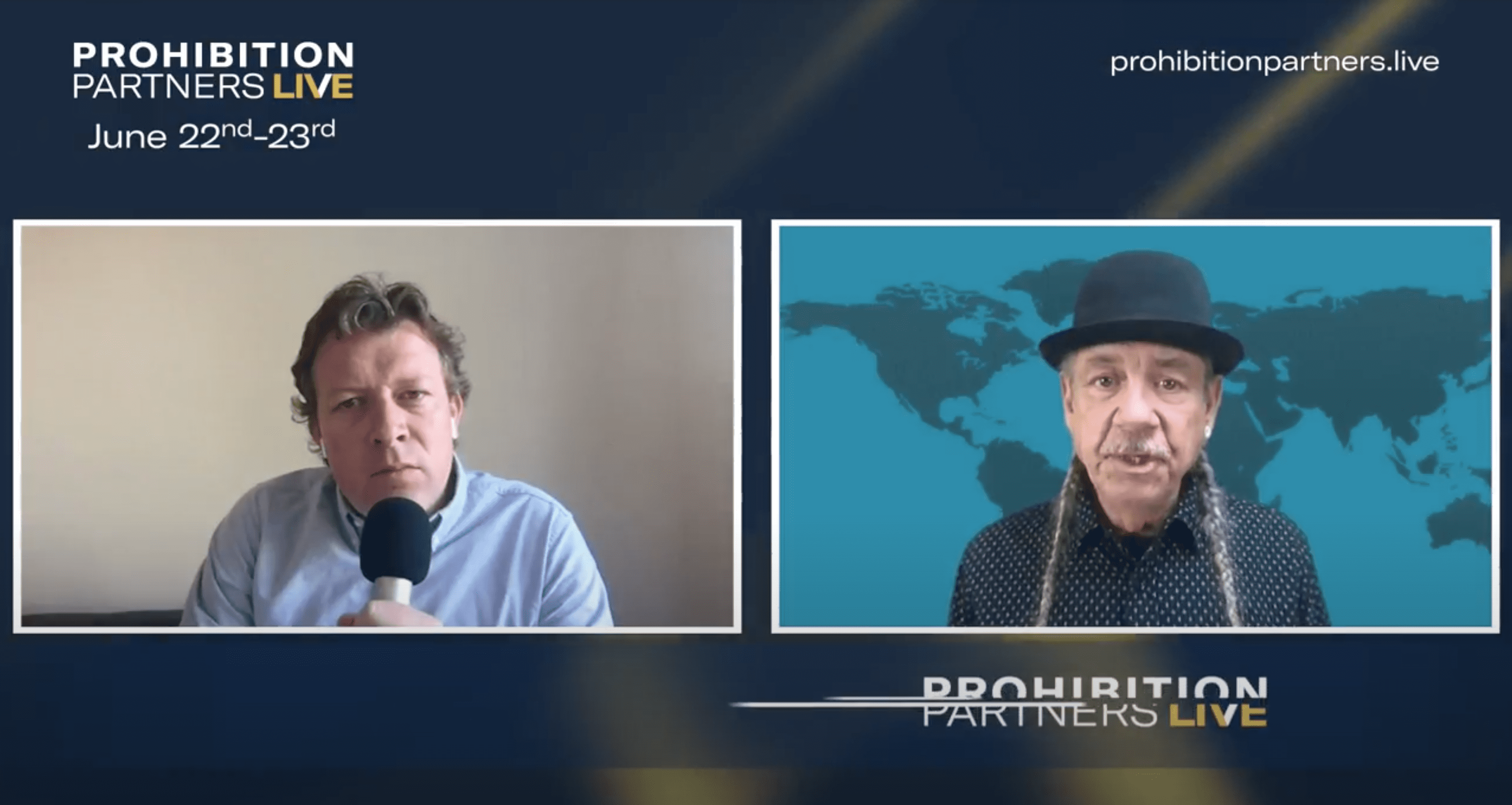 In the second installment of the ‘In Conversation With’ series, Prohibition Partners LIVE host Ralph Cochrane speaks with Steve DeAngelo, Chairman and Co-founder of Harbourside Inc.

Steve DeAngelo is a pioneering cannabis entrepreneur, activist, author, and on-screen personality. Also known as the ‘Father of the Cannabis Industry’, DeAngelo has co-founded several iconic cannabis businesses and organizations: Harborside, one of the first six dispensaries licensed in the US; Steep Hill Laboratory, the first dedicated cannabis lab; the ArcView Group, the first cannabis investment firm; and the National Cannabis Industry Association, the industry’s first trade association. He currently serves as Chairman Emeritus of Harborside Inc., a vertically integrated California cannabis company.

Ralph Cochrane (RC): Hello and welcome to another edition of Prohibition Partners LIVE. My name is Ralph Cochrane, and I am delighted to welcome Steve DeAngelo, who is the Chairman Emeritus and Co-founder of Harborside Inc., and some people call him the ‘Father of the Legal Cannabis Industry’, so Steve, welcome!

Steve DeAngelo (SD): Well thanks so much for having me Ralph, great to be here!

RC: So I want to dive into what some people are saying about you. Can you tell us a little bit about your connection with the cannabis industry?

SD: Sure. I fell in love with the cannabis plant as a young teenager, and I decided to make legalising cannabis my life’s mission because I didn’t want to spend the rest of my life living as a criminal. The first part of my career was just spent as a basic community organiser, street activist, putting on demonstrations. But over time I developed a niche in creating legal cannabis businesses that allowed me to spread the message about cannabis and to provide for my family at the same time.

The most notable ones were Harborside, which was one of the first six cannabis businesses licensed in the United States, that happened in 2006, and then I went on to found the first dedicated cannabis laboratory, Steep Hill Laboratory, and the first cannabis investment firm, the Arcview group. So for all of those reasons, the mayor of San Francisco, Willie Brown, called me the ‘Father of the Legal Cannabis Industry’.

RC: Just listening to your story there, so I’m familiar with Silicon Valley and the tech movement in San Francisco, what time period has your journey been over, and what kind of things have you seen that looking back you think ‘Wow, that was a real game-changer’?

SD: Most of my career was spent on the East Coast, I didn’t come to California until around 2001, and in 2006 was when I was granted the license for Harborside. But the events that really led to all of this started in San Francisco at the height of the AIDS crisis in the late-1980s, when my good friend, a guy name Dennis Peron, started distributing cannabis to AIDS patients because we had noticed that AIDS patients who consumed cannabis were living longer and having a better quality of life, and that was really the genesis of the medical cannabis movement that has now swept the globe.

RC: Talking about legislation in the US, you’re ahead certainly of where I am in the UK, will cannabis legislation be discussed during the 2020 Presidential Election, do you think?

SD: It’s not going to be a terribly important topic of conversation, given the Joe Biden has now become the de-facto nominee for the Democratic party. If Bernie Sanders had been the nominee then we would be having a very robust debate about cannabis. Unfortunately, Joe Biden has been a cannabis prohibitionist for most of his career, he’s now trying to walk back some of that position to appeal to the more progressive wing of the Democratic party, but sadly what I anticipate for the next four years is that whichever of the parties wins the next Presidential election, neither of them is going to be interested in moving cannabis reform at the federal level forward in any meaningful way.

RC: What lessons do you think the rest of the world can learn from what you’ve already done in the US with cannabis, both in terms of legislation but also investment, marketing, I mean there’s such a movement there that we have yet to see in the UK and most of Europe.

SD: Well I think there were two things that happened in the United States and North America that really made things quite different. First, there was a very dedicated, persistent, relentless grassroots movement of cannabis activists — people who engaged in the kind of direct action that I described with my friend Dennis Peron, just giving cannabis to AIDS patients. That was a movement that started in the early-1970s and is continuing to this day. There isn't really anything comparable in Europe that I’ve seen, in terms of the breadth or the power of that grassroots movement.

The second factor has been the marriage of free enterprise and cannabis. This happened really over the course of the last ten years, we have been able to create legal cannabis businesses. And so now a lot of the energy that is powering change in the United States is also coming from people who have seen the economic opportunity in cannabis. And it’s this combination of a strong grassroots movement and then a cannabis-powered industry that’s really made the difference here.

RC: When you look at that ecosystem and market that is developing, what gets you excited at the moment?

SD: What gets me excited at the moment is what I’m seeing happening all over the world. I spent 200 days on the road last year, and what I saw was that the spark we lit in California has now spread to- I visited four different continents, and it was in full evidence in all of those continents. So I think that that’s what’s most exciting. We now have taken this movement to a point where there are literally dozens of countries around the world that have reformed their cannabis laws, many more are considering reforming their cannabis laws, and I think that what that means really is that this movement is unstoppable now.

RC: I;ve read about something called the ‘Last Prisoner Project’ that you’re involved in, I was wondering if you could tell us something about that.

SD: The Last Prisoner Project is a non-profit advocacy group that I founded about a year ago, and its purpose is single-minded. We want to ensure that every single cannabis prisoner on Planet Earth is released and has an opportunity to rebuild their lives. This is for me just a basic moral imperative. If we are going to build a legal cannabis industry then we need to ensure that the people who were unjustly arrested before the cannabis industry was legal are released. And so that is what we are about doing, that work has become much more urgent with the COVID-19 crisis of course.

RC: Yes, I was going to ask, what impact do you think that the COVID-19 crisis has had on the cannabis industry, and on initiatives such as the Last Prisoner Project?

SD: So on the industry it’s really been, for the most part, a really positive impact because most states and most jurisdictions have declared cannabis an essential business and allowed it to remain open when most other businesses were closed, so our employees have continued to receive paychecks, our businesses continue to have revenue, and in fact we saw a significant uptick in sales in the first four weeks of the quarantine period — that has levelled off a bit now, but sales continue to be strong. So the cannabis industry is doing well.

It’s an entirely different picture for cannabis prisoners. I am really sad to report that just last week [at the time of recording] we lost one of our constituents who had been imprisoned in Missouri for ten years on a charge of cultivating cannabis. The judge who sentenced him, when he sentenced him, a medical cannabis law had already been passed in that state, and he knew that our constituent had cancer and still sentenced him to ten years in prison for cultivating this healing plant. So unfortunately, the prisons in the United States have become the world’s highest concentration of COVID locations. In the federal prison system, 70% of all prisoners who have been tested have tested positive for COVID, and so it is a life and death situation for our constituents now.

RC: Those figures are pretty sobering. Is the work that you’re doing focussed mainly on the US or is it kind of worldwide, and what are you seeing elsewhere as well?

SD: Our work so far has been focussed on the US, we’re a new organisation, we have a staff of two, and we’re really taking the lowest hanging fruit first. But the vision for the organisation is global, and we’ve begun to develop relationships in Canada, in Jamaica, in Colombia, in Mexico with individuals and organisations who will help us become active all around the world. In our view, it’s absolutely necessary that as a legal cannabis industry is built all around the world, it’s creating intergenerational wealth and already has created some billionaires, that we can’t leave these cannabis prisoners behind. So the vision is global, and we’re moving in that direction as quickly as we can.

RC: Well I wish you the best of luck with that Steve. And just to close, as you know, this year Prohibition Partners LIVE is going to be a virtual event online with the issues that everyone is facing [due to the COVID-19 pandemic], but in a way it also offers the opportunity to use the technology to meet the right people at the event. So there’ll be some very clever matchmaking technology in use at the event, and I just wondered, who are you looking to meet at Prohibition Partners LIVE this year?

SD: My main interest is going to be meeting people from around the world who are interested in moving the Last Prisoner Project forward, and creating beachheads for the organisation around the world, that will be my number one priority. A second priority is going to be developing correspondence for my own podcast, which we expect to launch sometime in the next quarter.

RC: Well thank you Steve, thanks to talking to us. We are looking forward to seeing you at the event!

You can hear more from Steve DeAngelo and Harborside Inc. at Prohibition Partners LIVE, from the 22 - 23 June. Additional preview interviews with some of the key speakers and panelists who will be featured at the event are available now, to watch via the Prohibition Partners YouTube channel.

Join Prohibition Partners LIVE on 22 – 23 June to discover the latest developments in the European cannabis sector, learn from our world-renowned speakers, and engage with our network of industry-leading professionals who are pushing boundaries in the cannabis space.